Eating your way around Japan 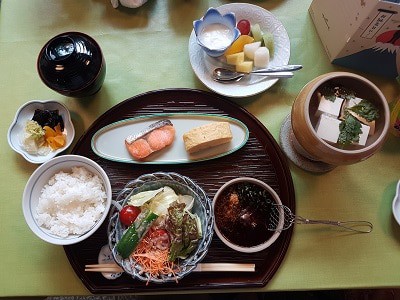 It would be fair to say that the food played a pretty central role in our trip to Japan, not only was it all delicious but it was also fascinating and entertaining.

We were struck first of all by how different it is to eat Japanese food in Japan from eating it in the UK. We have been to restaurants at home specialising in sushi and ramen, but generally our experience was of Japanese restaurants serving a variety of Japanese dishes. In Japan however, apart from the Kaiseki, multi-course banquet experience, restaurants focus on one type of dish generally. This hopefully gives an idea of the different types of foods and meals you might come across on a typical visit to Japan.

Tempura
So on our first night (and also on our last night) in Tokyo we went to Tsunahachi in Shinjuku, a traditional tempura restaurant , a real institution which has been going since 1923. There was only Tempura on the menu and we sat at the counter like the Japanese customers, chose some chef’s selections and drank a delicious Asahi beer while the experienced chefs sliced and dipped veg, eel, shrimp and squid in front of us. It was the freshest tempura we had ever tasted and it was so good we went back to Tsunahachi on our last night in Japan.

Sushi and sashimi
On our second day in Tokyo we were with our guide in the area of the old Tsukiji fish market and he dropped us at the end of our morning’s tour at his favourite sushi joint, Sushi Sei. Again we sat at the counter enjoying the theatre of the chefs behind the counter. Each group had their own chef who chopped and rolled and produced the most exquisite dishes of sushi and sashimi. It was all far superior to the sushi we have tried at home and every dish was hard to beat, but I think we all agreed that the crab rolls were our favourite.
We also tried a classic conveyor belt sushi one lunch time in the market in Kyoto which was great fun.

Katsu
We ate a fair bit of katsu on our trip and we found these meals particularly entertaining. There are various chains of restaurants serving katsu and they often require you to choose and pay for your preferred katsu meal ( pork/ chicken rice and curry sauce) in advance at a machine and then find a seat at the counter, hand your chit to the cooks behind, who within 10 minutes will produce a sizzling dish of katsu. Somehow the novelty of paying for your meal in a slot machine first never wore off.

Ramen and noodles
Ramen and noodles generally made up many of our meals. Again there are many highly acclaimed chains serving ramen (pay at the slot machine first) with bone broth stock the likes of which we had not tasted at home. We loved Nagis in Tokyo. In addition, outside the metropolis’ we found many speciality family run noodle restaurants, where the choice was udon or soba, hot or cold and with a choice of toppings (egg, pork, beef, smoked fish) and I think noodles came closest to the equivalent of our sandwich or a pizza. One of our favourite noodle meals was behind the Tokyo sumo wrestling dome where we had the privilege of being at the table next to a young sumo wrestler – we just told the waiter we wanted the same dish as he was eating. On another baking hot day in the pretty mountain village of Shirakagawa the cold soba noodles were a beautiful treat.

Yakitori
We loved yakitori! On one of our first evenings in Tokyo we found ourselves drinking beer and eating yakitori in Omoide-yokocho, which we nicknamed yakitori alley, a warren of covered narrow streets next to Shinjuku station crammed with tiny booths all barbecuing different skewers in front of you.

We also went to a full on yakitori restaurant in Kanazawa (Yakitori Akiyoshi) where we sat at the bar with locals who engaged us in fairly hilarious conversation, mostly about sport, baseball and rugby and a bit of British Brexit politics. The yakitori, cooked in front of us with billowing smoke was delicious. We ordered in waves, ordering more of what we liked – chicken skin (delicious) and less of what we didn’t (chicken neck- a bit chewy) but our favourite was the beef sirloin called pitoro .

Okonomiyaki
We first ate Okonomiyaki sitting on the floor, at the restaurant Gion Tanto in Kyoto, watching the cooks make this tasty Japanese style omelette with leek instead of the traditional cabbage, then stuffed with sea food and with a fried egg on top. we washed it down with a traditional lemon shocu (similar to sake but distilled rather than fermented). However I think the highlight was eating onomiyaki in Hiroshima where it is the regional speciality.  We ate at  the restaurant Reichan in the train station where often the best food is found! The experts at the counter prepared it before our eyes with an attention to detail which was so precise, it was hard to follow.

Bento boxes
The highlight of each of our many bullet train journeys was the bento box. We made sure we were at the station in good time to choose from the many outlets, and pop-up stalls offering fierce competition. The choice was vast and we could only really guess the contents. There were many sushi based boxes but they also included choices with meat and noodles – they were unusually delicious for cold fast food and always a surprise.

Gyoza
Gyoza (dumplings), what a fabulous poor man’s food! We ate them all over Japan, but our favourite time was in a simple restaurant, Gyoza Lou in Harajuku (fashion district) in Tokyo where the menu was basically straight gyoza. The open kitchen was in the middle of the room and the tables scattered around. They gyoza were £2 for 6. We chose meat and veg and prawn and almost managed 12 each, they were so delicious, but left groaning as we were so full.

Pub style – Izakaya
Pubs in Japan, Izakaya, are a great cultural experience. Like British pubs they vary greatly in style and atmosphere. In Kanazawa we visited two. On our first night we went to a real working man’s beer hall which had strip lighting and a raucous, bustly atmosphere. You can order beer as long as you order food with it and behind the counter the vats of oil were sizzling with deep fried snacks which were brought to us on sticks – everyone was very friendly and helpful as we pointed to other customers’ dishes to identify what we wanted. We received a full chorus of the usual shout out of good bye when we left from the customers as well as the staff.

The following night we went to a slightly more sophisticated establishment where we were given our own private room. We had portable coal BBQs brought to the table with selections of meat and vegetables to grill. It was delicious and great fun!

Kaiseki – Banquets
We were lucky enough to stay several nights in ryokans, traditional Japanese inns. One of the main attractions of such a stay is the traditional banquet style meal you enjoy as part of your stay. The meal is rather like a fancy tasting menu, Japanese style, with many tiny course, featuring local specialities. There will always be some meat and some fish but that will vary depending on where you are staying, so wagyu beef and oysters in Miyajima, river trout and duck in Tsumago and Hida beef in Takayama. There will always be miso soup and various pickles and vegetables and usually sashimi. Every dish was a taste adventure and often very entertaining especially the steak cooked on sizzling pebbles! The perfect accompaniment to this meal is sake and /or plum wine and your hosts will provide you with the local sake varieties as well as the ubiquitous brands.

A night in a ryokan was followed by a traditional Japanese breakfast which was again different depending on the local ingredients but usually included smoked fish, pickled vegetables such as kidney beans, rice miso soup, seaweed , omelette, tofu.
The food in the ryokans was of the highest standard and compared well to the Michelin starred meals I have eaten elsewhere.

Snacks
We did not confine our eating to regular meal times and didn’t miss an opportunity in between to sample the vast array of snack food Japan offers.  The food markets, especially the fish markets, were a treasure trove of delicacies and it was impossible not to stop and snack on freshly shucked oysters and the like as you wandered about. We particularly enjoyed the pickled cucumbers in the market in Kyoto, which were so refreshing.

Street food varied regionally, but one particularly memorable meal was eating octopus balls (takoyaki) on a bench overlooking the river in the street food centre of Osaka.

It’s fair to say we spent a lot of time in the 7/11 convenience stores where we sampled hot fried chicken and other delicious fast food pasties. We were particular fans of the triangular stuffed rice balls wrapped in seaweed (onigiri)  which provided the perfect snack on the go and we usually had  a couple of them in our bag at any one time. We were also fascinated by the many flavours of Kit Kat available, for example: chestnut, raspberry, mint, Sweet potato! We were waylaid for half an hour one day in a 7/11 store while we sampled and rated the different flavours!

The bakeries provided similar entertainment- what to choose from the literally dozens of different sweet and savoury pastries?

Vending machines
The drinks vending machines of Japan offered another joy! They appeared, as if by magic, on pretty much every street corner in towns and in rural villages and we only wished we had sampled them sooner. As well as offering beer and the usual soft drinks, they offered a whole lot more: sake in tins, shocu, highball (whisky and soda) and my favourite- ‘chosu’ plum wine in a tin, pure heaven! 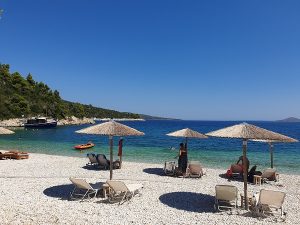 At the end of August we made it to the Mediterranean and discovered the perfect peaceful get-away-from-it-all Greek destination. Sleepy Alonissos, to the west of 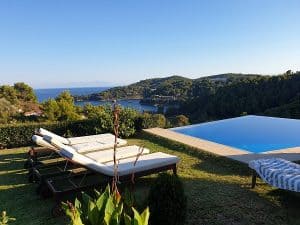 Well we thought we couldn’t find a Greek island to rival Alonissos – and really we couldn’t – Alonissos’s charms are unique. But we moved 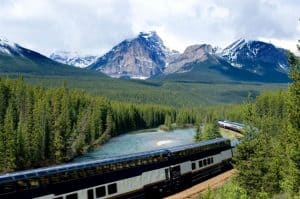 Armchair Travels – A world by via Zoom

Earlier in the year, while in the UK we were experiencing a world of lockdown we decided to run a series of webinars (Armchair Travels) 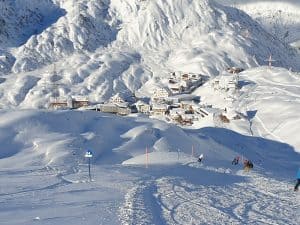 With a number of brilliant Christmas skiing holidays behind us there was no hesitation to head back to Austria again for the 2019 festive season.