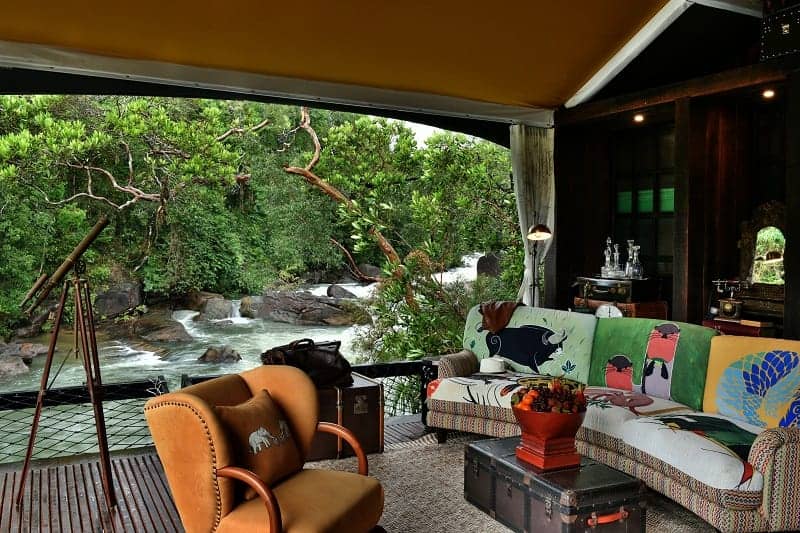 Among the many highlights of a visit to Cambodia in May was time spent in the Cardamon Mountains and a recently opened fantastic luxury jungle camp called Shinta Mani Wild. It is an area of the country I had not visited before and one where a lot of new rural options are opening up giving the opportunity to enjoy the wonderful landscapes, environment and wildlife of the region – a total contrast to the cultural gems of Angkor and Phnom Penh. 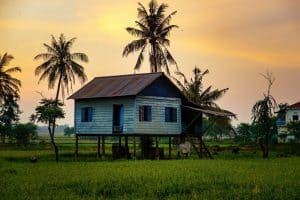 Heading South-West from Phnom Penh, using the main road to the coast, you come to the Cardamom Mountains and Kiriom National Park. In reality this is a succession of parks and reserves, joined up in places, remote in others and under pressure everywhere. There are areas of virgin rainforest, in places coming down to the sea, and increasingly there are places to stay and explore this stunning and beautiful landscape. 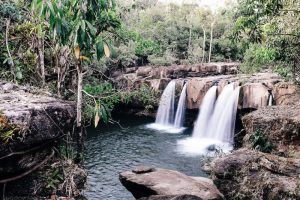 We were staying at the brilliant Shinta Mani Wild a luxury camp that is helping to preserve one of the key corridors linking protected areas with a 450 hectare reserve. Stopping logging and poaching is the priority and as part of this commitment they pay for, and have located, a Wildlife Alliance ranger station on the reserve. Staff at the camp are now 70% from the local area and many are ex-poachers and loggers, now bought into the world of long term conservation. 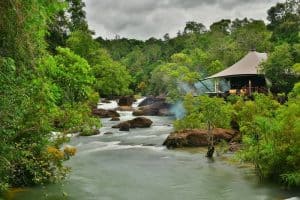 It might not be everyone’s cup of tea but many guests make the most dramatic arrival possible.  Sitting above the rainforest is the longest zip-line in Asia, a 350m adrenaline rush, which brings you close to the camp (or rather the bar). The final 40m is a short and quick zip across the main waterfall for a dramatic entrance and much needed welcome drink! 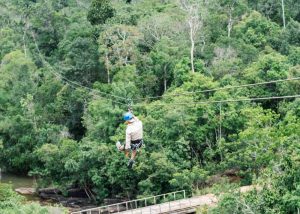 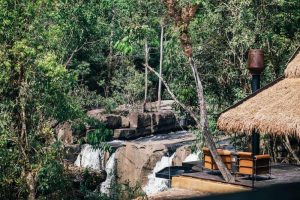 Protecting the forest is paramount to the extent that no trees were cut down in building the resort with its huge 100sqm luxury tents on stilts. Many sit over the gushing river and all feel totally isolated – giving a wonderful experience in the surrounding forest. Wildlife in the area had been pretty heavily poached however it is rebounding rapidly so expect to see the sights and sounds of the jungle from your tent and deck. The tents are simply luxurious and all individually designed in an ultimate 1960’s luxury safari way. Big fans, comfy sofas, huge chest freezers (this is a premium all-inclusive product so they are lavishly stocked) and hammock netting with cushions. Each tent has a butler, discreetly on call, who will appear as if by magic to whisk you to and from tent. 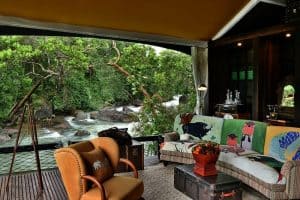 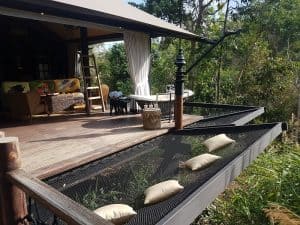 The headquarters and bar are a relaxed central meeting and area with the classic Bill Bensley eclectic style that wows in so many hotels across Asia. Bill was there at the same time working with local artists putting the finishing touches to some of the magnificent wall paintings and painstakingly working through a huge collection of books sent to him from Britain – carefully allocating each to the different tents. This central area sits next to centrepiece of the whole ensemble, the main waterfall, which you zip-line over. You can make your way over the boulders and swim here or there is the pool – a huge cast dark iron ‘bath’ constructed on site and seeming to float in the forest. 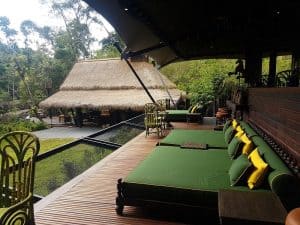 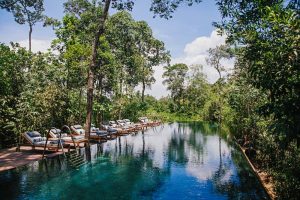 For me however the best part was probably the activities – there’s a pretty good selection depending on local conditions and time of year. Most days you can head up river with the wildlife guides to explore the protected reserve on foot. Sometimes also one of the chefs will join on a kitchen forage. The local fauna has been pretty badly hammered over the years (during the Khmer Rouge time hunger was a constant worry) so it is taking time to come back – highlights were seeing small mammal tracks and trails, a sign of returning populations. At the end of one walk we returned to the upper waterfall where a surprise cocktail party had been prepared amongst the rocks and pools with torches and candles creating a magical effect. Shinta Mani wild have an ‘expedition boat’ lower down the river and you can explore the waterways on this or by kayak. The highlight was the birdlife with Egrets, Kingfishers and various herons – did we see a sea eagle? There are over 450 species in the area so it’s great for birding enthusiasts. 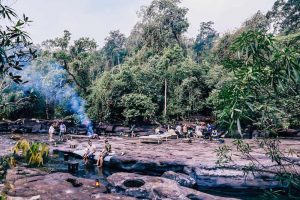 Other options include butterfly walks and mountain biking however the highlight for me was a morning out with a Wildlife Alliance anti-poaching patrol. There is a Ranger Station on the reserve so each day they head out on motorbike, with armed guards, to disrupt poaching and logging activities in the nearby area – there is no routine and they often rely on reports from villagers. We set out into a part of Bokor National Park, a bouncy 45 mins riding pillion, where they had not been for 10 days. A moped hidden at the end of the track gave an early indication of activity and this was quickly followed by a line of civet cat snares and the sound of a chainsaw in the distance. We came across an old shelter and then suddenly stumbled on a recent camp just off the track. Recent was an understatement – the embers were still glowing and the breakfast rice warm. Three hammocks (army issue), clothes, snares, petrol and other supplies and equipment were collected and bundled up – a liberal dose of petrol got a fire going in the damp forest. Two of the guards had gone off to track down the loggers but with no luck – the whump of the petrol exploding may well have warned them. The final bit of good news was that while searching the camp a snared porcupine was found, it’s leg in a very bad way. Apparently the stomach is much valued in Chinese medicine so that would have been kept and the rest of the animal was to be supper. A small victory but after treatment in the nearby rescue centre the animal would be returned to a safe local location. You never know what will turn up on each patrol – this was busier than most and just shows the constant battle to protect the local environment and wildlife. 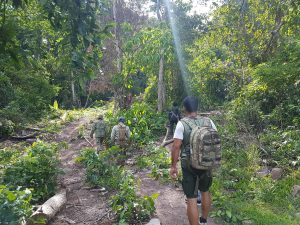 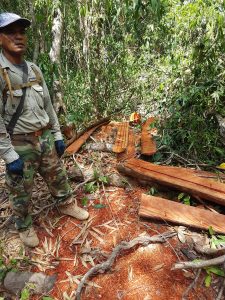 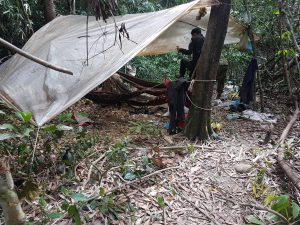 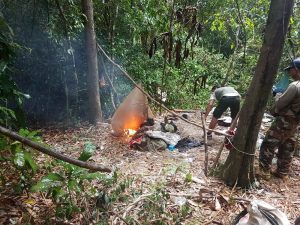 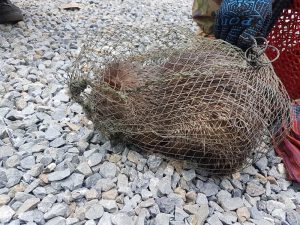 The activities are still evolving and it would be difficult to prescribe it for out and out wildlife enthusiasts just yet – it will take time to recover but early signs for birds, monkeys and butterflies is good.  Shinta Mani Wild is a truly unique luxury jungle experience with superb staff, food and tents and would make a wonderful addition to any visit to the gorgeous country. 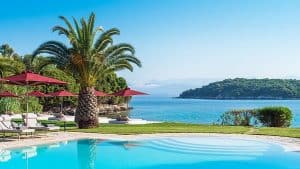 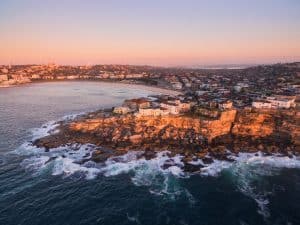 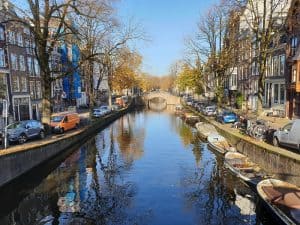 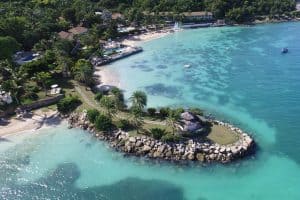